The attention to detail and decisions made in the blank making process have a huge effect on the final reed.  Many clarinet players focus all of their energy on the vamp shape, not realizing that blank dimension have just as much to do with the resulting sound qualities.  This is why many reed companies produce reeds with different blank characteristics.  For example, take the Vandoren line.  Blue box reeds are a thin blank with a traditional taper,  V12 are slightly thicker with a traditional taper and Rue 56 are a thick blank with the most taper(thinner at the butt of the reed).  It requires a good deal of experimentation to settle on what is best for each playing style.  Also, different types of cane may lend themselves better to certain blank styles.  For example a certain type of cane may sound and feel ‘mushy’ as a thick blank, but come into focus as a thin blank.  I recommend copying a style you like and jump off from there.  Below I address some of the main variables to consider when making a blank.  Some of this overlaps with the information and recommendations regarding selecting cane. 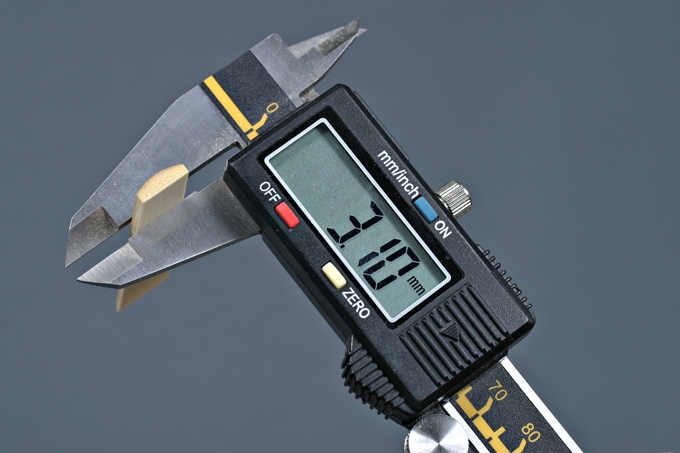 The hardest part of any piece of cane is the bark.  The farther you go into the cane the softer it becomes.  So, counter-intuitively thinner blanks generally produce harder reeds.  Though the standard amount of thickness variation isn’t enough to translate into major strength trends(a standard thin blank begins around 2.9mm while the thickest blanks are generally 3.2mm).  On the other hand these small differences can greatly affect the feel and response.  For example, a batch of reeds made to 3.1mm thickness will generally have noticeably different characteristics than a batch made at 3.2mm.  Different types of cane respond differently to different thicknesses. Experimentation is key here. The easiest way to measure blank thickness is with a pair of Digital calipers 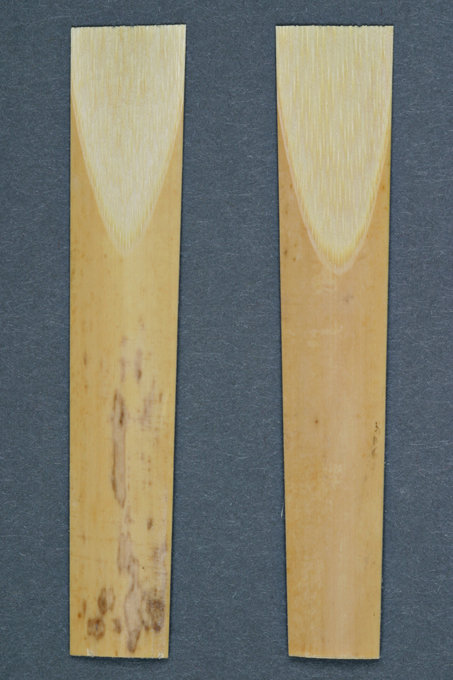 The left is a more traditional taper, the right a 'quicker' taper.

You can observe the effects of reed taper by modifying any reed on sand paper.  Lay the reed on it’s side with pressure at the butt end of the reed.  Drag it back along the paper careful not to remove material from the very tip.  Doing this on both sides of the reed will result in a reed with more taper(thinner toward the end).  Although this is a pretty inexact methodoligy you can at least get a sense of the difference that the taper has on the final product.  You can then order a shaper with the custom measurements you prefer. 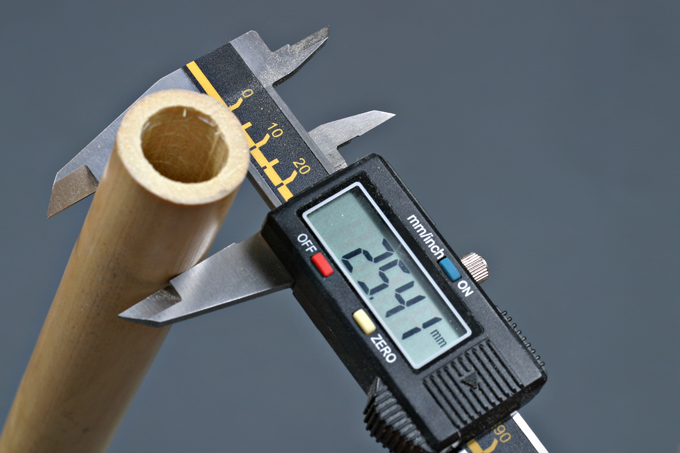 This topic was covered in cane selection but some points bear repeating.  The larger the diameter of the cane the flatter the arc of cane.  This will result in a blank with thicker rails(overall blank thickness remains the same). Conversely a small diameter tube will yield a blank with thinner rails. A thinner rail on the blank means that the rails of the final reed will be made from material that was closer to the bark of the reed. Because that material is generally harder, the rails will be harder on the final reed. A happy medium is usually the best choice, but like all other elements of reed making experimentation and testing are the only way to find out the best solution for the individual. 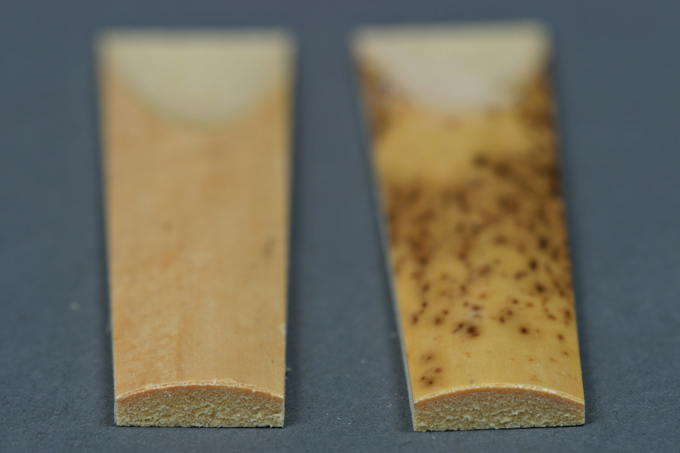 If the blank is significantly thinner on one rail chances are high that rail will be stiffer.  This is the same principle outlined above.  Some balance imperfections can be compensated for in the shaping process. You should always aim for perfectly balanced blanks.